Well done to the 2016 winners of our Succeeding Against the Odds award. Your hard work and dedication is a true inspiration!

Dillion Banda, a Security Management student at Oxbridge Academy, initially came to South Africa to escape the civil unrest in his home country, Zimbabwe. It was a treacherous journey.

When he arrived here, he started working as a security guard. He says:

The job of a Security Guard was a take it or leave it option. I took my Zimbabwean Diploma and degree and flushed them down the drain. I had no story to write home about.

In 2012, the dark cloud over me became more darker and gloomier, my financial situation began to drown me. It was that time when a Good Samaritan passed by pointing into the dark cloud for me to notice the silver lining. Behold on that lining sat proudly the Oxbridge Academy. My bridge to redemption and salvation.

It came with a dear price. I had to raise an initial registration fee. I sold my inherited flute that was passed on to me by my father when he passed on. May his soul rest in peace. It was like a burning knife was being shoved into my liver. I had thrown my bread into the river.

This was only the start of Dillion’s struggles. His wife lost her job, which meant that they lost their home, and they had to move into a shack. Dillion then took up extra work to help pay for his studies. He describes the situation as follows:

I found extra work to wash cars at the traffic lights to supplement my monthly course instalments. Every day at five o’ clock I woke up to study my tutorials, cockroaches and rats raced on the pages of tutorials, leaving them caked with brown and black stains. The highlighters of doom. The leaking roof was a nightmare. The shebeen next door was ever open with blurring and volcanic thundering music speakers and cheering, laughing, belching and whimpering voices of women and men. The smoke of cigarettes and ganja (marijuana) freely wafted and trickled into the cracks of my shack. The intoxicating smell of urine, human waste, vomit and rotten water played on my nose. My head twisted while I strained my eyes following the written lines in the dim candle light.

Further tragedy then struck his family – their shack burned to the ground, and they lost everything.  Despite all of this hardship, however, Dillion persevered with his studies, until he completed his course and secured a better job:

One day I was found reading my last tutorial at work by my supervisor, overdue fatigue had overtaken me, and I was sleeping deeply with saliva drooling at the corner of my mouth, flooding my tutorial page. I escaped that ordeal through the eye of a needle with a verbal warning.

Today I am a Security Manager with a hefty gross salary of R10 000.00. I have enrolled again with Oxbridge Academy to embark on the Hotel and Catering Management course to augment my prospects in the Hotel Industry.

In the face of trying circumstances and numerous obstacles, Dillion has shown great commitment and determination. And in spite of all the hardships he faced, he managed to achieve excellent results in his studies. We are therefore proud to name him as a recipient of the Oxbridge Academy Medal for Succeeding Against the Odds. 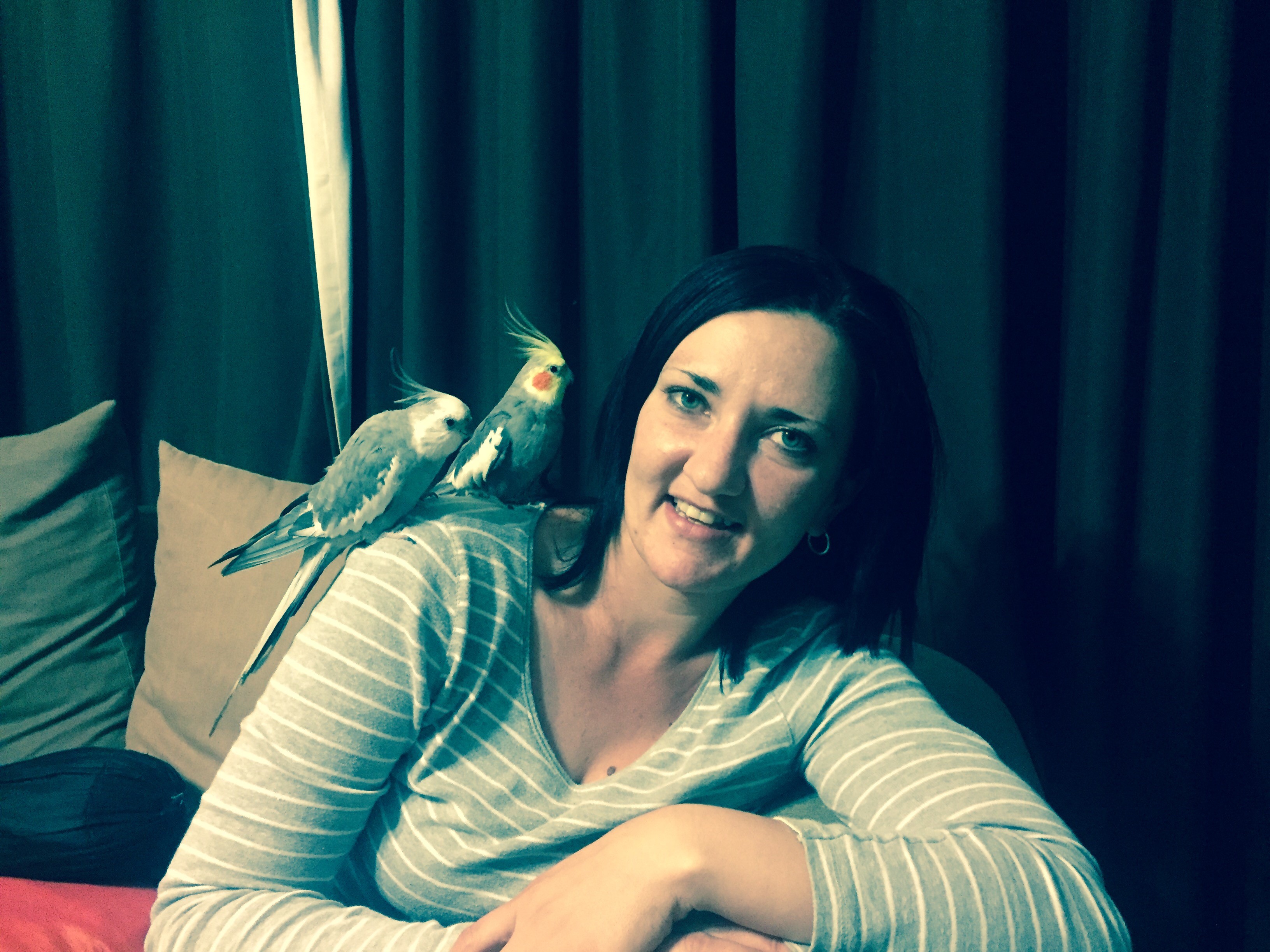 Lizette grew up in an abusive home, with an alcoholic father who took her out of school when she was in Grade 9. After she was taken out of school, she tried to teach herself using her friends’ textbooks, but she couldn’t write the exams and therefore couldn’t get her certificates.

Lizette is now studying a bridging course at Oxbridge Academy, but she has not had an easy journey. She says:

In 2007 I met a wonderful man, got married and had 2 beautiful children. In 2013 we were attacked in our home, my husband was shot and killed in front of me and my two children, and I was 3 months pregnant with my third child. She was born 5 months later, 6 weeks prematurely. I was alone and had no family or support. I was a full-time working, single mother of 3.

I struggled on my own for two years with no help.

We both work full time. Life is so difficult with 6 kids to support, schooling and everything is so expensive. And I’m sure you can imagine that with Grade 8 as your highest level of education, the salary that I work for is anything but good.

A few months ago I decided that I need to start doing something, I need to try make something of myself for the sake of my kids, so I joined Oxbridge Academy, I don’t have much time for myself and only have the opportunity to do my assignments at night after 8PM when my kids go to sleep.

I believe that I have succeeded against all odds, I have been through a lot of trauma, pain and suffering in my life, but I have always been determined and a real fighter, I WILL NOT let anything get me down! Even though I don’t have a decent education, or much time on my hands, I always go out of my way to learn and make a success of anything.

Lizette has shown great courage, along with determination to succeed despite the challenges life has thrown at her. Not only is she doing well in her course, but she is clearly also committed to working hard towards a better future for herself and her family. We are therefore happy to name her as a recipient of the Oxbridge Academy Medal for Succeeding Against the Odds.

Back home in Limpopo I have to financially & emotionally support them [her brother, niece, and daughter]. At work I still have to be productive & perform. I have an 8-year-old that I have to fend for on my own. Daily homework supervisions, house chores, school meetings, Dr’s visits as she has severe chronic allergic rhinitis, shopping, sporting activities and so forth. I work long hours & it takes me 2 hours to and from work every day. Sometimes traffic is extremely bad. I use public transport .My bills include bond, insurance, food, school fees, study fees, data bundles, clothing, electricity, rates & taxes, transport for myself, & I take care of 3 households. It’s difficult. At the end I still have to study & write assignments. Most of the time I’m emotionally & physically tired. I have to pull myself together. Distance learning makes it all possible.

Despite her challenging circumstances, Mokitsi has shown great commitment to her studies. For this reason, we are proud to name her as a recipient of the Oxbridge Academy Medal for Succeeding Against the Odds. In 2014, Tsebiso (a third-year geology student) and his sister had to drop out of university, as their father was retrenched. With only a Matric certificate and an incomplete university academic record in hand, Tsebiso then tried to find employment at the mines, but all in vain. His situation became even more difficult when his girlfriend later fell pregnant, and he was still unemployed.

To make matters worse, his father fell ill and was hospitalised for three months. Due to his father’s illness, his mother was forced to quit her job as a domestic worker. Tsebiso said:

My mom had to quit her job because of my father’s conditions which were worsening each and every day. One day, as sick as [my father] was, he took my hand and told me that winners are those who persist, those who never give up no matter how hard it can be. Though it wasn’t as easy as it sounded, I stood up and started a small family business called Nkaki Family Corporation; it specializes with cleaning products and community services. So far I’ve hired three people and hope to increase the number by the end of this year.

With his own business, Tsebiso hopes not only to employ more people, but also to provide bursaries, and to “encourage young people who are struggling with jobs to never stop dreaming but rather work hard and be creative.”

Tsebiso says that even though he did not expect to return to his studies, Oxbridge Academy has made it easy for him through affordable fees and clear, relevant study material.

Tsebiso has shown great entrepreneurial spirit, determination, and the will to succeed despite being faced with many obstacles. For this reason, we are proud to name him as a recipient of the Oxbridge Academy Medal for Succeeding Against the Odds.

Nadia registered with Oxbridge Academy because she believes that education is the key to success. For the past five years, she has been working as a Beauty Advisor in the retail industry, and she says that “there’s a lot of challenges in the beauty industry and there is always a new beauty trend coming out every year. Before I started to register as a student, I had a lack of self-confidence in myself all the time, because according to the people I am just a lady who is selling cosmetic products and it’s not like that.”

Aside from the difficulties she has faced in her career, Nadia has also experienced a difficult home life. In her motivational letter, she tells us that she lives with her brother, who has Bipolar Disorder, and who has threatened to take his life on numerous occasions. She also tells us how her mother is drunk almost every weekend, and shouts ugly words at her.

Despite the circumstances at home, Nadia believes that if you work hard, something good can come out of any situation, and that if you believe in yourself, anything is possible. So far, she has managed to achieve high marks in all her assignments, and she lives by the motto ‘if you dream it, you can achieve it’. To other students, she says:

Even in trying circumstances, Nadia has shown strength of character, maintained a positive attitude, and achieved success in her studies. For this reason, we are happy to name Nadia as a recipient of the Oxbridge Academy Medal for Succeeding Against the Odds. Riziki, who is from the Democratic Republic of Congo, struggled to pay for her studies while looking after her two children, a daughter who is seven and a son who is three. Her situation was made complicated by the fact that she is not a South African citizen. She says, “My life has never been easy at all, starting from the fact that I am not a South African citizen and have to find myself in an English speaking country with a passionate desire of taking my education further in order to give my two kids a better life.”

During her studies, her husband lost his job, and she became the sole breadwinner in their family. As a result, she became depressed and developed high blood pressure. But instead of letting her situation get to her, she persevered until she completed her international diploma.

Riziki has shown willingness to work hard, commitment to her studies, and determination to succeed despite the various obstacles in her way. For this reason, we are pleased to name Riziki as a recipient of the Oxbridge Academy Medal for Succeeding Against the Odds.

Find out what our students have to say:

Thank you so much Oxbridge Academy it was such a pleasure to study with you. My assignments and materials were always delivered and marked on time. Can’t wait to do more courses with you!